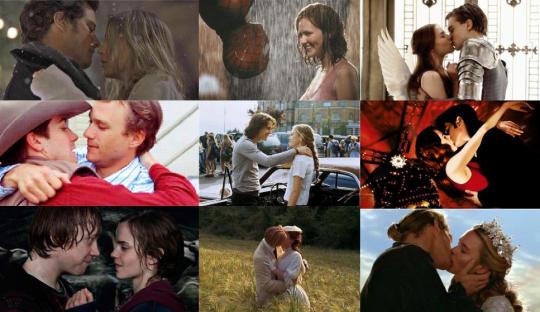 I’m trying to find out. And I want you to FIGHT TO THE DEATH (well, not literally) for your favourite.

I’m currently writing a book I’m not allowed to talk about yet, and, yes, it involves kissing. For it, I need insight into what *you* like out of a kissing scene, and why. So, I asked the wonderful hive-mind of Twitter what your favourite movie kiss is.

A LOT of you had MANY OPINIONS and I’m delighted to reveal the longlist….

Who kisses who? Claire and Bender

Who kisses who? Bridget and Mark Darcy

Harry Potter and the Deathly Hallows

Who kisses who? Ron and Hermione

WE WAITED SEVEN BOOKS AND EIGHT FILMS FOR THIS KISS. WE EVEN ENDURED THE AWKWARD SCENE WHERE HARRY AND HERMIONE DANCED IN A TENT FOR THIS KISS.

Who kisses who? Spiderman and Mary Jane

From Here to Eternity

Who kisses who? Sergeant Milton Warden and Karen Holmes

(that fact may not be true)

Who kisses who? Westley and Buttercup

Since the invention of the kiss, there have only been five kisses that were rated the most passionate, the most pure. This one left them all behind.

A Room With A View

Who kisses who? Lucy and George

A solid head-grabber, this one. “POOR CECIL”

Who kisses who? Rosie and Alex

This is what happens when you let people vote for things…

Who kisses who? Omar and Johnny

Who knew a laundrette could be so sexual?

Who kisses who? Christian and Satine

If you haven’t sang the boy-girl duet from ‘Elephant Love Melody’ during a traffic jam than you’re not living life, quite frankly.

Who kisses who? Baby and Johnny

Who kisses who? Josh and Cher

No suck and blow here, thank you very much

Who kisses who? Holly and Paul

Who kisses who? Noah and Aliie

“It wasn’t over, IT STILL ISN’T OVER.” …and, with that, every girl dies a little inside, whenever she kisses someone who isn’t Ryan Gosling

Who kisses who? Jack and Ennis

Proof that head-clutching is not a heteronormative kissing phenomenon

Who kisses who? Romeo and Juliet. Obvs.

The Stealthy Elevator kiss beat the Sexy Swimming Pool kiss by a hair of a whisker in the prelims. Will that damage its chances of an overall win?

10 Things I Hate About You

Who kisses who? Kat and Patrick

I have a lot of Heath fans on my timeline, it appears. HERE COMES THE HAIR TUCK!

Who kisses who? Vadar and Thomas

Before the bees came…

Holly, how the hell did you come up with this list?

There were too many nominations to fight them all to the death. This longlist was made up of each kiss that was nominated more than once.

Apart from all of us feeling dissatisfied by our own romantic lives? Well.. I’m going to randomly pull two kisses out of a hat (ASDA bag) and then pip them against each other on Twitter. Check the #BestMovieKiss hashtag once a day to make sure you can vote for your favourite.

This is sudden death. If a kiss doesn’t win a Twitter poll, it’s out. We keep going until we get a WINNER.