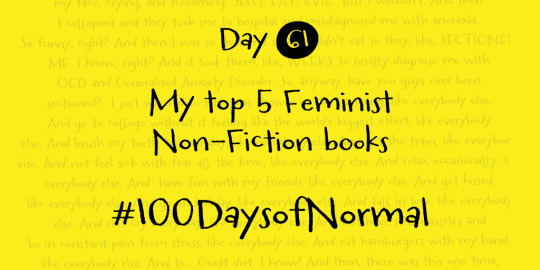 One of my favourite things about writing the Normal trilogy is that I’ve been on my own feminist learning journey through writing the books. Here are my favourite books I’ve come across while doing my research.

1) How To Be a Woman by Caitlin Moran

This half autobiography, half feminist manifesto literally changed my life. It was like my gateway drug into feminism.

What’s good about it?
It’s. Just. So. FUNNY. And yet inspiring! Caitlin just perfectly captures all the hang-on-this-is-wiggy moments you experience as a woman and makes you laugh at them…and then makes you want to get involved with some serious activism to change them.

What’s not so great?
If you aren’t a fan of caps lock, this book ain’t for you. AND WHY AREN’T YOU A FAN OF CAPS LOCK?

My favourite quote?
“Without feminism, you wouldn’t be allowed to have a debate on women’s place in society. You’d be too busy giving birth on the kitchen floor – biting down on a wooden spoon, so as not to disturb the men’s card game – before going back to quick-liming the dunny.”

2) Men Explain Things to Me by Rebecca Solnit

This collection of feminist essays will make you angry, very angry. But in a good way. A way that makes you want to turn all this new-found anger into ACTION.

What’s good about it?
Rebecca invented the genius term – “mansplaining”* and this is the focal point of this collection of essays. I know, for me, mansplaining happens ALL THE TIME (yes, you, Mr Osteopath, who said you’ve “never read Harper Lee” but then proceeded to explain her legal issues to me, even though I’M AN AUTHOR AND I COLLECT HER BOOKS AND YOU KNOW THIS). It’s also beautifully written.

What’s not so good?
With any collection of essays, some are stronger than others. But this book is worth its price for the essay The Longest War alone – a staggeringly scary look at violence against women.

My favourite quote?
“To spin the web and not be caught in it, to create the world, to create your own life, to rule your fate, to name the grandmothers as well as the fathers, to draw nets and not straight lines, to be a maker as well as a cleaner, to be able to sing and not be silenced, to take down the veil and appear: all these are the banners on the laundry line I hang out.”

This book, based on the game-changing blog of the same name, shoots dead any argument that feminism is no longer needed. A collection of the ridiculous/heart-breaking/head-bashing NONSENSE of the everyday sexism girls and women face, every day.

What’s good about it?
Laura’s writing style is so very readable, and she weaves together all the Everyday Sexism stories beautifully. She also takes time to address intersectional feminism and double-discrimination (though some may argue shoving these into their own chapter isn’t ideal).

What’s wrong with it?
Though it does a stellar job highlighting sexism, there isn’t a huge amount of practical advice in there on how to KILL IT DEAD FOR EVER.

My favourite quote?
“Women everywhere have had enough. We’ve reached our tipping point and we’re not afraid to say it. We’re not afraid to be dismissed or belittled, or laughed at any more, because there are too many of us…We can’t be silenced when we’re all saying the same thing.”

4) The Female Eunuch by Germaine Greer

An oldie but a goodie. When this book came out in 1970, it was HUGE and ignited many a feminist flame in women across the globe. Fifty years later, a lot of it still stands up. It totally dismantles ideas of marriage, relationships, and how a woman “should” lead her life.

What’s good about it?
This is another book that changed my life. I have never felt more empowered than I did reading this – especially as I’m at the age where everyone around me is getting married. Germaine’s writing is so cutting and yet so funny.

What’s not so good?
It’s very academic, and I had to read it in lots of little bursts with breaks. Some of the language used in it was okay in the 70s, but certainly isn’t okay now. And Greer’s understanding of queer and trans issues is totally, totally wrong.

My favourite quote?
“Loneliness is never more cruel than when it is felt in close propinquity with someone who has ceased to communicate. Many a housewife staring at the back of her husband’s newspaper, or listening to his breathing in bed is lonelier than any spinster in a rented room.”

5) We Should All Be Feminists by Chimamanda Ngozi Adichie

Based on her incredible TEDx talk, this manifesto is incredibly short and yet incredibly powerful. It’s a bit like doing a shot of hardcore feminism…in a good way.

What’s good about it?
Chimamanda manages to shout down every stupid argument against feminism with wit and warmth, in less than 80 pages.

What’s not so good?
I could have happily read something three times as long.

My favourite quote?
“Culture does not make people. People make culture. If it is true that the full humanity of women is not our culture, then we can and must make it our culture.”

* “Mansplaining” is when someone (usually a man to a woman) explains something to someone else in a patronizing or condescending way. (Often when the person listening knows more than the person explaining…) 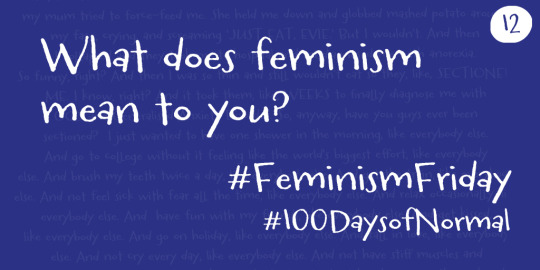