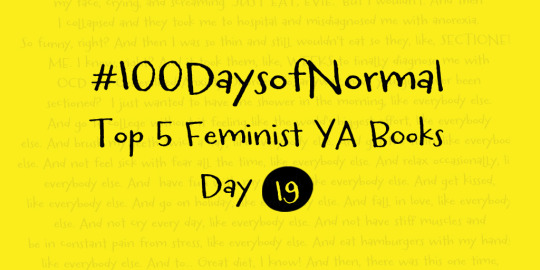 Ahead of tonight’s #UKYAchat about feminism and gender
equality in YA, Holly has written about her top 5 feminist YA Books for Queen of Contemporary blog. Here’s a juicy taster of what to expect:

‘Am I Normal Yet? is the first book in a
trilogy about a group of girls who set up their own feminist campaign
group called ‘The Spinster Club’. I think YA gets a bad rep when it
comes to feminism. So many people keep bleating out the dreaded words
‘Bella’ and ‘Swan’ – like Twilight isn’t a) TEN years old, and b) Not
the only YA book out there. In fact, YA have LOADS of incredibly
feminist books…’

Head over to Queen of Contemporary to see the books Holly has included in her top 5!

And don’t forget to log into Twitter at 8pm, search for #UKYAchat and join in the conversation with authors, bloggers, librarians and readers about feminism and gender roles in YA.