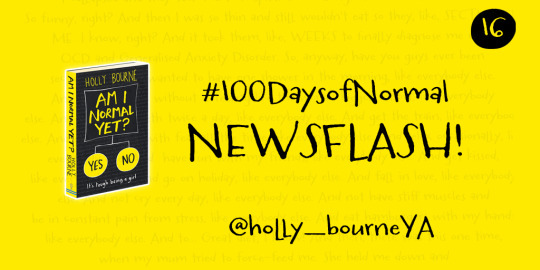 The official YALC 2015 schedule has arrived at the usbornepublishing office and not only is the lineup AMAZE but it also includes our very own Holly Bourne!

YALC is a celebration of young adult books managed by reading charity Book Trust. It’s an interactive event
where YA fans meet their favourite authors, listen to panel discussions
and take part in workshops. It is taking place on 17th-19th July at London Film and Comic Con at Olympia (Hammersmith Road, London W14 8UX).

Holly is going to be at YALC on Sunday 19th July at 10:30am chatting all things Mental Health in YA alongside Brian Conaghan, Annabel Pitcher and Matt Whyman. After the event, Holly will be signing copies of her books.

Sunday 19th July 2015
Main stage
Mental Health in YA
10.30-11.15am
As part our our ‘What is Normal?’ strand, we’ll be speaking out about mental health in books for young adults. Authors Holly Bourne, Brian Conaghan, Annabel Pitcher and Matt Whyman will be exploring the representation of mental health issues in YA today.

The full lineup is on the Booktrust website here.

Hope to see you all there!